You are here: Home / About Crane

Crane is married to the love of his life, Katharine, and has inherited two great blessings! First and foremost, he is a follower of Christ, husband, and father. A staunch conservative on both social and economic issues, Crane is devoted to truth. He began his radio career in 1993 at Ole Miss where he hosted a weekly news analysis program. Crane decided to pursue media full-time as well as his Masters in Media Communications in 2000. Over the years, he has been published in St. Louis Post-Dispatch and served as Creative Editor and contributor to The Lighthouse Review. In television, he has hosted Nothing But Truth on Charter Cable and was a regular guest panelist on KETC Channel 9 “Donnybrook.”

In radio, he has hosted Nothing But Truth on WGNU, KTRS and FM Newstalk 97.1 as well as co-hosted their morning show in Saint Louis before enjoying the opportunity of hosting Nothing But Truth on AFR Talk from 2009-2017. Crane has returned full-time to his first passion of teaching and coaching tennis in addition to guest hosting for Larry Connors, The Annie Frey Show, participating on the Dave Glover Show, and being a regular guest on Columbo and Katie. When Crane is not working, he enjoys spending time with his beloved Katharine and the family. 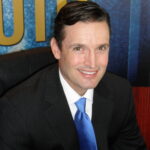